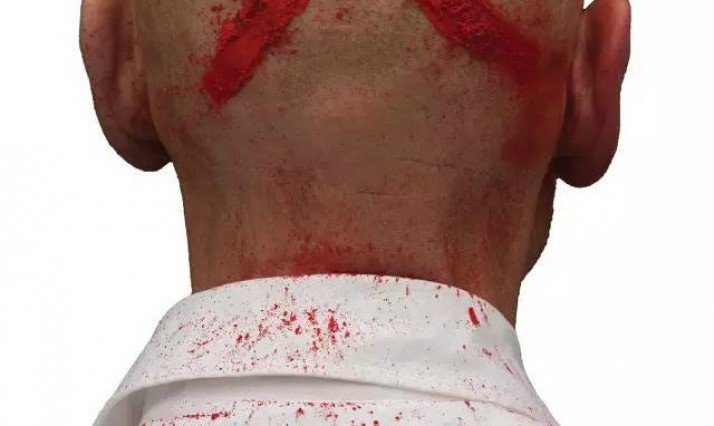 Besides the performances at Danish Cultural Center, the program for “Beijing Live” also consists of talks, lectures and workshops at Goethe Institut – which is almost the neighbour of the Centre in 798 Arts District – and the nearby CAFA Art Museum and Central Academy of Fine Arts.

At Beijing Live you will experience a number of established performance artists, above all Alison Knowles, who will revive the legendary “How to make salad”, that she did in 1962 together with Marcel Duchamp. Nigel Rolfe still testing the limits of his body creating live “action art”, with references to Joseph Beuys and Marina Abramovich. Bjørn Nørgaard is also one of the absolute heavyweights in the program, a long the local artists Xiao Lu, Cui Tao and Cang Xin, whose performances not seldom are quite barrier-breaking. Artists like Loïc Connanski and Noah Warsaw are also not novices within performance art.

Altogether it is a very distinguised and representative selection of performance artists, that will occupy Danish Cultural Center the coming weeks, and it is with great joy, that the Centre is part of the creation of this new platform for dialogue between Chinese artists and artists from all over the world. On the 30th of October the festival will close by an open seminar of the future of performance art in China.

"At its best, performance art is an art of integrity. One could even say that it is integrity embodied. Honest and truthful to its inherent qualities, with the unique possibility of human identification, as a way to understand not only ourselves, or other people, but the world.

Intellectually and emotionally it can be the opposite of human alienation. As an uncompromising expression of being, of existence, of hope, of a new becoming, of body and mind as one, of presence, of togetherness. It can be an artistic expression of life. With a heart."

The performance program is

“To those for which life is a spectacle art has no meaning”, wrote my good friend, the British writer and critic John Berger in his outstanding book The Success and Failure of Picasso in 1965, the same year I was born. It is a statement that has always followed me. In my actions as well as in my understanding of art.
If the spectacle is contrary to performance art, it is also the opposite  to life, to authenticity, to being, alienating us from ourselves and our existence. When art becomes a spectacle, it loses its capacity to give people hope, it loses its depth and becomes entertainment, an expression of escape and despair. Art is not decoration. It takes risks, human, emotional and formal. For a painter each brushstroke can be a journey into the unknown. Yet, it can also be a colourful darkness empty of humanity, meaning and emotions. Empty of hope.

Performance art is not an exception. It can also be decorative, an empty gestre, a spectacle, expressing a vacuum of meanings and emotions. It can fail its human potential, expressing its own opposite. When performance art becomes this, it has not only betrayed its inherent existential qualities, it has lost its heart.

At its best however, performance art is an art of integrity. One could even say that it is integrity embodied. Honest and truthful to its inherent qualities, with the unique possibility of human identification, as a way to understand not only ourselves, or other people, but the world. Intellectually and emotionally it can be the opposite of human alienation. As an uncompromising expression of being, of existence, of hope, of a new becoming, of body and mind as one, of presence, of togetherness. It can be an artistic expression of life. With a heart.

Its possibilities to bridge the gap between art and life is paramount, since it embodies reality in the form of a human action. It is just real. Like life it is not only alive and ephemeral, it fuses time and space, the here and now, as a setpoint for the artist’s own creation. Not as in pretending or representing, but as in being.

At its best it unites body and mind, declaring the individual presence of a human experience. It can be confined to the art gallery, but it can also go out on the streets to meet people. As an art form of reality, it is mobile and can exist and live anywhere. It is never homeless. This makes it highly independent, created at a certain moment in a specific site, yet linked to the future. With the unknown as one of its distinguishing qualities. A relationship to what is not yet executed, but what will become, gives it an open character. An art expression where anything can happen. Just like in life.

In his book Pop Art (1977) the French art historian, José Pierre defined the avant-garde as the struggle between opposing art movements. Todays contemporary art scene lack this opposition in art, and even movements as such. The avant-garde with its attitude of struggle for an idea, aesthetic or social, has been pacified. Which of course is devastating for the development of art and its future. Since it means that there is no movement. The lack of opposition between art forms, the lack of different views, ideas or expressions to be fought for, have created a scene of a mainstream collusion where superficial qualities rule, like money and fame.

In regard to this corruption of the spirit, performance art is to some extent an oasis of human oxygen, integrity and togetherness. If there still exists an avant-garde it is not to be found in the mainstream art fair world. It is possible, though, that it can be found in performance, conceptual or street art, where an attitude of artistic opposition, of ideas and human dialectics still have a value.
Marcel Duchamp’s work and theories are today probably more actual than ever, not only his groundbreaking formulation in art of a philosophy of non-dualism. But also through his firm non-commercial attitude to art and its production. Mainstream art has as we know been transformed into its opposite, a commercial object to be bought and sold, and worse, to be decontextualized. But Duchamp’s ideal still lingers on, and will never fade. Maybe it is a utopia, but utopias and hope have always been a starting point for change.
The effect of alienation in todays society, dominated by a never ending consumption of objects and images, of an artificially constructed need, was formulated by Guy Debord, as early as in 1967. In his famous manifesto, La Societé du Spectacle, the French philosopher and Situationist wrote:

“The alienation of the spectator to the profit of the contemplated object is expressed in the following way: the more he contemplates the less he lives; the more he accepts recognizing himself in the dominant images of need, the less he understands his own existence and his own desires… This is why the spectator feels at home nowhere, because the spectacle is everywhere.”
These words were prophetic when Debord wrote them in 1967. Today we live de facto in his described society of the spectacle. A society dominated by a frenetic consumption of objects and images, generating an alienation and sense of human isolation despite, or maybe even heigthened by, the social networks and their formidable quality of physically alienated communication.

These lines of Debord, also illustrate that we lack a contemplation of the human, of our fellowmen, and his or her actions in reality. Not his or her selfies. We need the opposite of alienation. We need face-to-face emotions, experiences, togetherness, integrity and solidarity. We need those very human sentiments we never will find on a mobile phone.  We need to feel the presence of the other human, not look at him or her – as an object, as an image.

This is where performance art can play a role as an artistic expression of the human in action. It is not an object we are contemplating, but another human being doing something which we want to comprehend and understand.  Because it is made by another individual. Maybe it is not always understandable. It might be different, it might not have another function than to make us think. But it is real. The highest form of realism in visual art.

What we can imagine is what this particular human action is telling us. Not as a narrative story. But as an action, symbolic or not. This is where performance art can go beyond the spectacle and its alienation, to achieve a feeling of togetherness, of being and of understanding. That we are all the same, yet different, And that these qualities is what makes us human. All Together.

85’ – Performance. Screening of Seven Sins by Wen Pulin’s. Followed by a discussion with some of the artists of the ’85 Movement.

East Village – Performance (Screening of China Action by Wen Pulin’s. Followed by a discussion with some of the artists of the East Village.

He Yunchang – in Dialogue with….

Panel discussion with a number of curators, critics and artist on the possible future of Chinese performance art within five years.