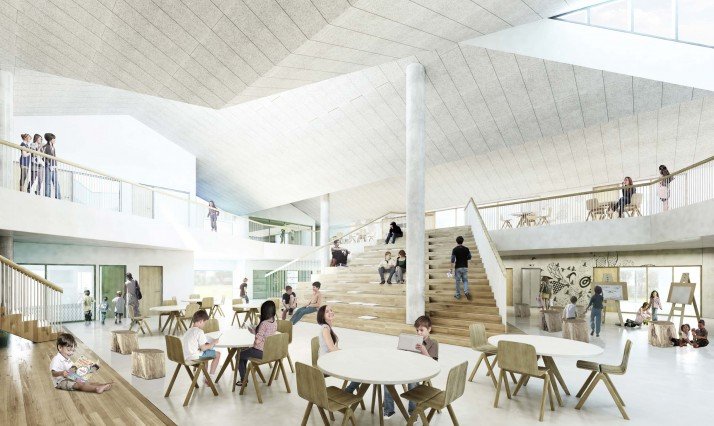 How can architecture contribute to make learning vivid and support students in learning the best way possible? And how does the school of tomorrow look like?

Architect Thomas Bang  Madsen from the architecture office CEBRA will present the office’s approach to educational architecture, which is based on the conception that the buildings have to adapt to the students and not the other way round.

The lecture will be accompanied by a documentary film A Great School, that shows how well-designed buildings and spaces can act as the ‘third teacher’ and help students and pupils achieve better results. The film will present examples of school buildings that support modern educational principles and practices.

The event is part of the Lower Silesian Festival of Architecture DoFA in Wroclaw, and a platform for the meeting of ECC Wrocław 2016 with Aarhus 2017.

Juliana Engberg, Programme Director of ECC Aarhus 2017 and Carina Serritzlew, CEO of The Architecture Project  will with their presentation “Sociable Architecture” introduce the program of Aarhus 2017 along with its architectural events including “RISING” Architecture Week 2017.

Thomas Bang Madsen is an Associate and Architect at CEBRA. He started at the office immediately after graduating from the Aarhus School of Architecture. Since then, he has worked as leading design architect on numerous educational and cultural projects, both nationally and internationally.

CEBRA is a Danish architecture and design practice, founded in 2001. The office employs a multidisciplinary international staff of 40 at their head office in Aarhus, DK and branch office Abu Dhabi, UAE. CEBRA works intensively with the design of educational institutions and learning environments, establishing this field as one of the office’s core areas over the past years. It has thus developed a series of award winning projects at home and abroad and completed childcare institutions, public schools, high schools and institutions of higher education.

Aarhus 2017 uses art and culture to rethink the challenges of tomorrow. The theme “Let’s Rethink” indicates that Aarhus 2017 wish to transform the Central Denmark Region to a cultural laboratory, where alternative solutions can grow.

The project has been realized in cooperation with Danish Cultural Institute in Poland, The Architecture Project and Aarhus 2017. It is co-financed by the Danish Ministry of Foreign Affairs, Ministry of Culture and Agency for Culture and Palaces.

„Sociable Architecture” by Juliana Engberg (Aarhus 2017) and Carina Serritzlew (The Architecture Project) at closing celebration of DoFA’16 incl. announcement of the winners of the Honorary Award of Wroclaw Architects’ Association SARP