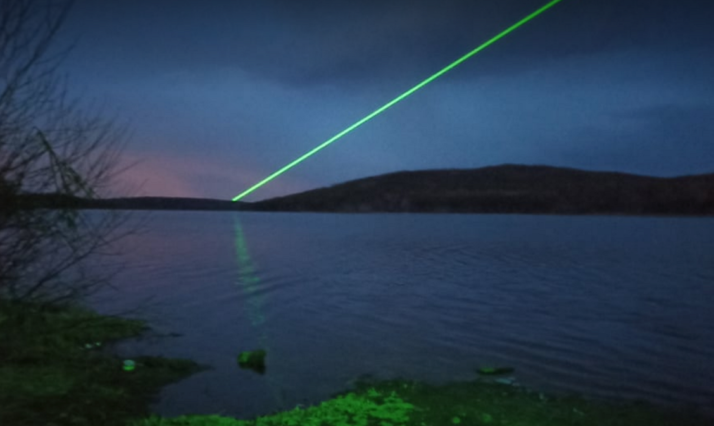 Danish Cultural Institute in St. Petersburg has in cooperation with the Dmitri Prigov Foundation and the artist Elle-Mie Ejdrup Hansen restaged one of the most discussed works of art in recent times in Denmark.

In 1995 the work “The Line – Light, Peace Sculpture” by Elle-Mie Ejdrup Hansen drew attention all over the world. The work was a 532 kilometres line of laser light along the west coast of Jutland. It was intended as a greeting of peace at the 50th anniversary of Denmark’s liberation following the German occupation during World War II, but the work ended up sparking controversy.

Now the core of the original work has traveled to the Ural Mountains in Russia under the name: “The Ural Line 2021” – it brings a renewed greeting of peace. This time in the 30th anniversary of the fall of the Soviet Union and the beginning of the Russian Federation.

The core of the “Ural Line” is again a laser light which now is presented in a video art piece, which opened at the Boris Yeltsin Presidential Center in Yekaterinburg on Thursday 27th of May 2021. Here it is part of the group exhibition called “Prigov’s Distant Planets”, where eight Russian and international artists present new works centering on their relationship with the artist and poet Dmitri Prigov (1940-2007).

Prigov and Elle-Mie Ejdrup Hansen collaborated in 1995 on the Peace Sculpture project – and now, 26 years later, the artwork has been moved to his home country, curated by his son Andrey Prigov, who lives in Denmark.

Do you want to know more?

Then you can listen to “Kulturen på P1” (in Danish), where Elle-Mie Ejdrup Hansen and Director in St. Petersburg, Henriette Borg Reinholdt, talks about what happened in 1995, about Prigov’s artistic work, the Danish-Russian cultural exchange and not least the thoughts behind “Ural Line 2021”. Listen here.