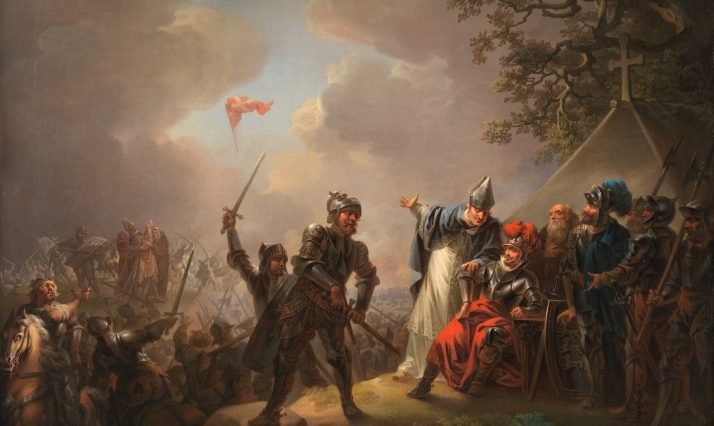 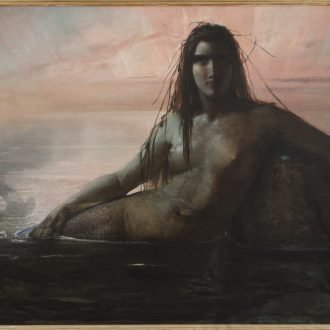 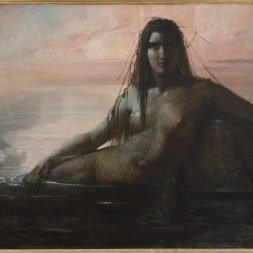 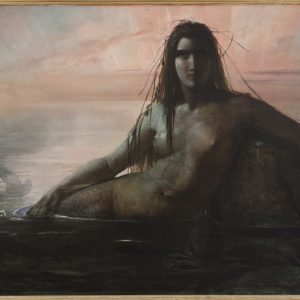 For the occasion of Dannebrog’s 800th anniversary, Kadriorg Art Museum in collaboration with the National Gallery of Denmark (SMK) present the exhibition Dannebrog – The Flag That Fell from the Sky: The Golden Age of Danish Art.  Based on selected paintings and prints from The Danish Golden Age, the exhibition focuses on the artists’ reinterpretations of historical events.

In 2019, the 800th anniversary of the Christianization of Estonia is commemorated through the story of how the Danish flag, Dannebrog, fell from the heavens during the Battle of Lyndanisse on 15 June 1219. The depiction of the battle is done through the use of the type of pictures generally known as history paintings. Therefore, the exhibition centers on the impact of a series of contemporary and historical events such as the falling banner Dannebrog, first (re)told by Renaissance chroniclers of history and subsequently reinterpreted by artists, playwrights and satirists like Ludvig Holberg.

Through more than 500 years of European cultural history, the various efforts to maintain or revive the collective memory of historical events pivotal to the rise or development of a nation, have involved the use of literature and theatre, but especially the use of painting and prints. Works like Leonardo da Vinci’s The Battle of Anghiari, Velasquez’s The Surrender of Breda, Gericault’s The Raft of Medusa and Picasso’s Guernica are all examples from the great canon of art history that emerged out of the artist’s or their patron’s desire to tell, on the basis of actual historical events, stories about victories, losses and the traumatic inhumanity of war.

“The past history of Denmark took on special significance for the nation when, during the Napoleonic wars, it was embroiled in a number of major political conflicts that led to the loss of its fleet, much of its territory and many lives. These traumas and the economic crisis that followed in their wake demanded a readjustment of the nation’s self-image, and art played an extremely important role in this process. Thus, this revival of recorded historical events of the medieval Livonian Crusade and of the myths and legends sparked by early history writing is, above all, a retrospective and reinterpretative look at how history painting from the first part of the nineteenth century played a role in the reconstruction of Denmark,” says Mikkel Bogh, Director of the SMK.

Historical images were all created to ensure that a given event was remembered, acting as a mirror image or lesson for contemporary or later audiences to learn about themselves and shape identities through. However, posterity often forgets the context in which such images were created. With the exhibition and Dannebrog – The Flag That Fell from the Sky: The Golden Age of Danish Art, Kadriorg Art Museum and SMK want to invite visitors to explore such recreated contexts.

The exhibition shows a collection of the finest paintings in the possession of SMK, from the period which is called “The Golden Age” of Danish painting. The oldest paintings start off at the end of the 1700-hundreds to catch some of the decisive moves in the arts and politics that laid the foundations for the creation of a new, liberal and national self-understanding. In Danish art history the two professor-colleagues at the Academy of Fine Arts in Copenhagen, Nicolai Abildgaard (1743-1809) and C.A. Lorentzen (1746-1828) has been regarded as not belonging to The Golden Age, though their role as teachers is relevant to its development.

The exhibition is organized in collaboration between Kadriorg Art Museum (EE), Danish Cultural Institute in Estonia, Latvia and Lithuania (DKI) and The National Gallery of Denmark (DK)

The exhibition will be opened at the presence of The President of Estionia, Kersti Kaljulaid and Her Majesty Queen Margrethe II of Denmark.