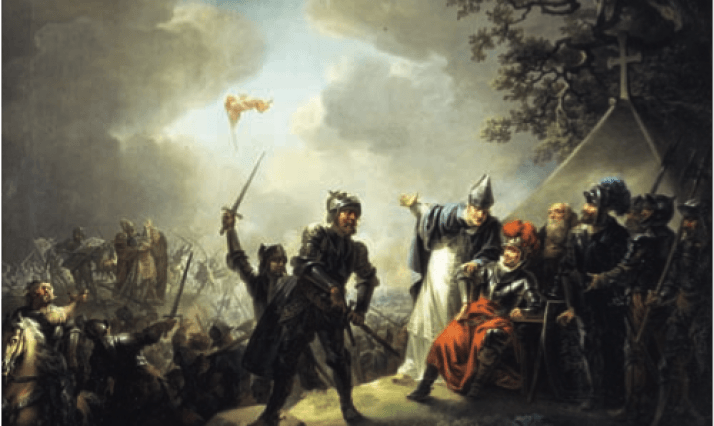 Her Majesty The Queen visits Estonia

Denmark’s history is closely connected with Estonia’s capital, Tallinn, which according to the legend was the place, where Dannebrog fell from the sky in 1219. On the 800th anniversary of the event, Her Majesty The Queen arrives in the city aboard the Royal Yacht Dannebrog and begins an official visit in the Baltic country.

On 15 June 2019, it will be 800 years since Dannebrog, according to legend, descended from the sky and helped the Danish king Valdemar the Victorious win control over northern Estonia.

That occurred at the town of Lyndanisse, today known by the name Tallinn, which is believed to mean the “Danish town” (from “Taani linn” in Estonian). There, on the anniversary of Dannebrog’s descent from the sky, The Queen will begin the official visit in the Estonian capital, where there will be a focus on the Danish flag as well as the shared Danish-Estonian history.

In addition to that, The Queen will also participate in the celebration of the 100th anniversary of Estonia’s independence, which the country is celebrating from 2018-20.

Estonia’s President, Her Excellency Kersti Kaljulaid, hosts The Queen’s visit. Together, The Queen and the President will open the Golden Age exhibition “Dannebrog – The Flag That Fell From The Sky” at Kadriorg Art museum.

At the exhibition, visitors will come to see works by, among others, Christen Købke, C. W. Eckersberg and Nicolai Abildgaard together with C.A. Lorentzen’s famous painting of Dannebrog, which falls from the sky. The well-known painting is thus exhibited for the first time outside of Denmark.

The exhibition is developed in collaboration between Kadriorg Art Museum, the National Gallery of Denmark and Danish Cultural Institute in Estonia, Latvia and Lithuania.

Afterwards, The Queen takes part in a multi-faceted program, which includes the opening of Tallinn’s newly laid out rose garden called The Danish Queen’s Garden, which will mirror the Danish King’s Garden. The rose garden is an initiative by DCI.

The Queen will open a historical exhibition and the presentation of research grants, supported by the Carlsberg Foundation.

The Queen will also be present at Freedom Square in the heart of Tallinn, where a family day will be held to celebrate the Danish and Estonian flags.

Artists from both Denmark and Estonia will appear, and afterwards The Queen and the President will attend a galla performance in Estonia Concert Hall by Concerto Copenhagen and the Estonian Philharmonic Chamber Choir presenting musical gems of the baroque repertoire such as by Bach, Händel and Telemann as well as compositions by the world famous Estonian composer Arvo Pärt.

In the evening, the President hosts a gala dinner in honour of Her Majesty. The visit concludes the next day with a celebratory church service at Tallinn Cathedral, which was founded a short time after the arrival of King Valdemar in 1219.

Painting by C.A. Lorentzen: The Legend of the Danish Flag Falling from the Heavens during the Battle of Lyndanisse in Estonia in 1219. National Gallery of Denmark.