Steirischer herbst: Art addressing the controversies of our time 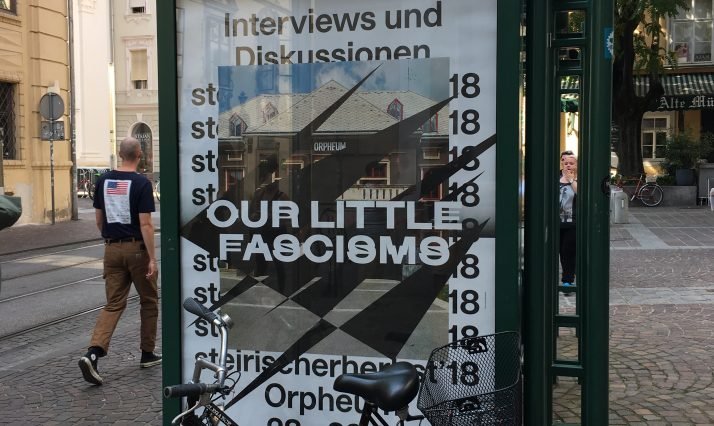 Steirischer herbst: How art can address the controversies of our time

Notes from steirischer herbst in Graz, Austria. DCI visited the festival to explore the focus on art and culture as powerful tools in addressing many of the challenges that the world faces today.

Using the city of Graz as an historic backdrop, the festival this year explicitly confronts issues that have come to define our current political climate: The rise of nationalism and right-wing populism.

Today, as was the case in the 1930’s, which form the background for the founding of Danish Cultural Institute, the populist tendencies are flourishing, international relations are souring, and political conflicts get in the way mutual understanding. Steirischer herbst shows, that art and culture can be powerful tools in addressing many of the challenges that the world faces today. And on the frontlines of controversy and conflict, it can remind people of the radical potential of creativity and imagination.

Beyond avantgarde: Steirischer herbst in its newest iteration

Steirischer herbst is widely regarded as Europe’s oldest avantgarde festival. Although it is best known as a theater festival, steirischer herbst has since its inception in 1968 used music, theater and visual arts to position itself in opposition to nationalist expressions of culture. Russian-born curator Ekaterina Degot is the first non-German-speaking director to be appointed to lead the festival; this iteration of the festival is the first in her 5-year tenure as steirischer herbst redefines itself as an international art event.

The program is strongly curated by Degot and her team, which aim to create an engaging narrative by actively using Graz’s buildings and public spaces for installations, exhibitions, and performative works that draw from the history of the region. This narrative, entitled Volksfronten, incorporate the works of more than 40 artists and opened on September 20, 2018.

The legendary Bread & Puppet Theater Company opened the festival at Graz’s Europa Platz. The group, which was founded in the early 1960’s and became famous through their protests against the Vietnam War, staged a ritualistic performance and protest.

The piece for the festival, Insurrection Mass with Funeral March for a Rotten Idea, highlighted the plight of displaced people around the world as well as the politics that enable it. The performance culminated in a parade through the city using the group’s signature massive puppets, which attracted hundreds of local citizens to join the performance.

Another highlight of the opening was the newly-commissioned open-air performance Putsch (After D.A. Prigov) by Russian-born artist Roman Osminkin. The performance took place around Graz’s Schloβbergstiege, a picturesque staircase informally known as the Russian Steps, which leads to the top of a hill in the center of town.

Exploring the space between poetry and performance, Osminkin explicitly draws on the conceptual poetry of Dmitri Aleksandrovich Prigov, who’s work Coup. A Play for Two Loudspeakers formed the basis of the performance.

A prerecorded dialogue between two loudspeakers played while performers on the staircase would assemble and reassemble words and phrases laden with political meaning. At the same time, performers among the crowd of spectators would yell out slogans and songs, rendering the crowd an unwitting participant in an agitprop shouting match.

Laibach and The Sound of Music

The climax of steirischer herbst’s opening was the highly anticipated concert performance by controversial Slovenian group Laibach, who had been commissioned to stage a reinterpretation of the 1965 American musical The Sound of Music.

The band began their concert with a sermon, stating: “Fact: Fascists took power in Austria. The state is led by a conservative black-brown coalition under a young chancellor with the face of a mild apostle. He came to power with the support of the far-right Freedom Party, the direct descendants of the Nazi Party.” Playing with totalitarian aesthetics, Laibach reinterpreted such classics as My Favorite Things, Do-Re-Mi, and Edelweiss with their signature industrial sound. With the help of stunning visuals and a children’s choir, the show examined the beloved musical as a crypto-fascist artifact of Austrian nationalism.

A central aspect of the festival is the involvement of the local population through public installations. One of the more noteworthy works is Withdrawing Adolf Hitler from a Private Space by Berlin-based artist Yoshinori Niwa. A used-clothes container is installed on a prominent square where passersby can read the question: “Tormented by your Nazi grandfather’s hat in the attic? Unsure what to do about it? To ashamed to sell, to emotional to burn?”

In a public campaign, the artist offers the people of Graz to dispose of any Nazi memorabilia, they might have accrued in the hidden corners of their homes, thus instigating a public conversation on the politics of memory, family, and history.

Another poignant work is Henrike Nauman’s installation Anschluss ’90, an impressive showroom of kitschy furniture that imagines an alternate-history scenario, in which Austria decides to join a newly united Germany in 1990 instead of in 1938.

It is evident that the artistic works of Steirischer Herbst are overtly political and intimately tied to the curatorial narrative, that has been woven through Graz by Degot and her team. The name of the core program, Volksfronten, is deliberately ambivalent, and this approach – invoking dangerous imagery in order to critique underlying structures and tendencies – permeates the festival. This is not without reason: As Degot writes in the introduction to the exhibition catalogue, Welcome to the Fronts, “all over the world, the state propaganda machine, rising xenophobia, anti-refugee politics, and the complicity of the “entitled” population in those structures that maintain its privileges offer astonishing and alarming déjà-vus of the 1930s.”

The role of art in volatile times

Art that openly and politically engages with the public has the potential to shape the conversation on divisive issues, the effectiveness of which can be measured in the resistance it meets. A recent example is artist Olu Oguibe’s Monument for strangers and refugees, an obelisk erected as part of the documenta14 art exhibition in Kassel, which was recently dismantled by the city.

The action was praised by the local chapter of Alternative für Deutschland, which stated that it was appropriate because “political enemies” had made clear that the Obelisk was to be “read as a political symbol”. The situation underscores the precarious position that works of art can inhabit in the public discourse, as well as its potential to highlight the issues of our time.

Steirischer Herbst does not intend to answer the questions that arises from the controversies, but in its newest iteration, it is a powerful showcase of how a strong curatorial direction can openly wrestle with issues that matter.

DCI’s Nikolaj Vedde visited steirischer herbst that took place throughout the city of Graz, Austria and ran through October 14, 2018