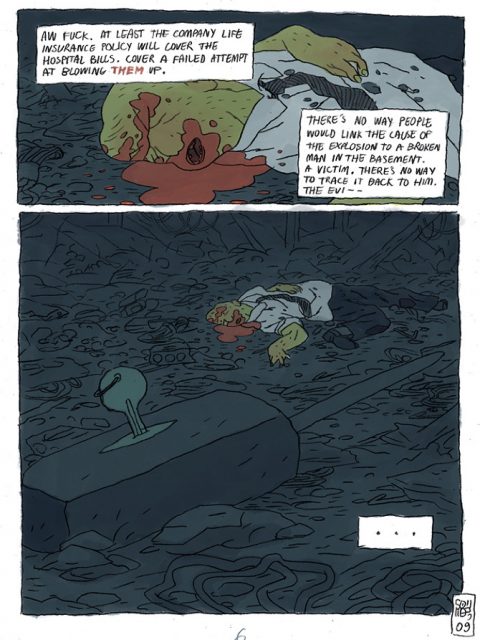 A reneweal of the Danish comics scene

A lot is happening on the comics scene in Denmark today. The genre has gone from being mostly satirical or oriented towards children to becoming a literary and graphic art form with strong influence from other visual arts.

A reneweal of the Danish comics scene

A lot is happening on the comics scene in Denmark today. The genre has gone from being mostly satirical or oriented towards children to becoming a literary and graphic art form with strong influence from other visual arts.

In the Danish tradition, comics were viewed either as a means of freedom of expression, with the comic strip functioning as a useful tool for political satirists, or as a literary genre primarily for children. Danish Comics have now entered a new era with the present generation of comic artists, graphic novelists, and illustrators interested in a range of visual expressions, stories and experiences. The “new wave” follow in the footsteps of strong traditions in other countries for expanding the limits of what comics can be. Generally, comics has achieved much more recognition in recent years, also from critics – this goes for Denmark as well as internationally.

Meanwhile, Denmark’s first education in graphic storytelling has opened in Viborg as part of The Animation Workshop, with the first brood graduating Summer 2017.

The audience of the genre has broadened as well and the comic artists working within the fields have diversified. Long gone is the stereotypical comic book nerd. The new generation of comic artists brings a broad range of stories and lived or imagined experiences to the world of comics, hence, appealing to a broader audience.

Below, you get a glimpse of the exciting talents of the Danish comic book scene.

The work of Signe Parkins (1979) is an excellent example of how the comic genre has been influenced by visual arts. In Parkins’ Tusindfryd (Eng.: “Daisy”) Magritte rhyme with pommes frites. With clear references to the Belgian surrealist artist, Rene Magritte, Parkins turns the sexual conventions upside down. In June 2018, she won the Danish comic award, Pingprisen (The Ping Prize), for Tusindfryd. Parkins tells her stories in a very blossoming and bold language. Tusindfryd is an incredible portrayal of the feelings within that focus on the bodily orifices and the meaning of passion.

In 2015, Parkins published Signe Parkins & Drawings. A drawn diary for which she was nominated for Pingprisen. The publication is a selection of drawings from her blog of the same name, for which she was also awarded Pingprisen. The diary is imbued with personality. It portrays both big and small impressions from the everyday life. It is illustrated in a clever and sensitive way where corrections and deletions are kept and the book cover is handmade with scrap fabric by Parkins herself.

One of the young comic artists who have succeeded in transcending the genre and appealing to a broader audience, is Halfdan Pisket (1985), who studied visual arts at the Royal Danish Academy of Fine Arts, graduating in 2009.

In 2014, Pisket published the first part of a trilogy, a graphic novel called Desertør (Eng.: “Deserter”), the two second volumes following 2015 with Kakerlak (Eng.: “Cockroach”) and 2016 with Dansker (Eng.: “Dane”). The trilogy has been both an artistic and a commercial success, for which Pisket has received numerous nominations and awards, including the Pingprisen and the Carl Deleuran award. He also received a three-year working grant from Danish Arts Foundation as one of the two first comic artists together with Rikke Villadsen.

The trilogy depicts the life of Pisket’s father, James Pisket, and sheds light on the contemporary history of immigration to Denmark. In the first volume, Pisket tells his father’s story through flashbacks from a cell in a military prison in Turkey. The father travels as a deserter from the Turkish army to Denmark where he becomes a weed dealer in Christiania, a self-proclaimed autonomous neighborhood in Copenhagen, and in the end, a law-abiding Danish citizen.

The figures are drawn in black and white with sharp contours. The language is simple and intelligible with a poetic nerve, which is filled with the expression of pain, grief, and war. It is both an illustration of a personal trauma and an illustration of the bigger trauma of the Armenian genocide.

The trilogy has so far been translated into Dutch, Swedish, Spanish, and French.

Rikke Villadsen (1976) is a graduate from Denmark’s Design School’s Institute of Visual Communication. In collaboration with the author Bjørn Rasmussen, Villadsen has created the graphic comic series 9 piger (Eng.: “9 girls”) of which two of the nine comic albums have been published. In Liftet (Eng.: “The Ride”) and Hesten (Eng.: “The Horse”), Villadsen and Rasmussen play with both the grim and the pleasant in a chaotic and claustrophobic storytelling. In 9 piger Villadsen explores gender and identity depicting girls both hunting and fleeing. She uses carbon pencil, which gives Liftet a gloomy expression. Hesten evokes claustrophobic feelings, and the sharp composition of the images emphasizes a sensuous intensity.

Villadsen shows another artistic approach in her work Et knald til (Eng.: “Another bang”), where she blends unfinished compositions with well-structured finished compositions. In Et knald til, Villadsen deconstructs the masculine clichés that are particular to the Western genre, which she depicts with humorous honesty as a part of her ambitious gender-political criticism.

She has yet to be awarded, but she has been nominated for Pingprisen four times and in 2015, she received a three-year working grant from the Danish Arts Foundation.

Furthermore, Villadsen is an editor of comic books for the publishing house Basilisk.

Mikkel Sommer (1987) is a self-taught comic artist and self-employed illustrator working and living in Berlin. He is a prolific illustrator and has produced illustrated books, comics and drawings since 2009, besides illustrating for newspapers such as The New York Times and the Danish Politiken and working as a character designer for Cartoon Network on several of their shows.

Among his many publications is Hadet (Eng.: “The Hate”) from 2015, an illustrated poem collection, for which Sommer did the illustration work to accompany Thorstein Thomsen’s 64 poems. The poems are written as a personal journal of a young girl during World War II.

Sommer started drawing in early childhood and has developed his line ever since. His style is sketch-like in appearance and in many ways reminiscent of the French new wave. Sommer’s approach to the craft is systematic and repetitive, and he is a self-proclaimed rigorous planner and perfectionist. For the illustrated work, which he did for the book Burn Out by French author Antoine Ozanam (Casterman), Sommer drew more than 70 sketches of the main character, featuring him in many different positions and with different facial expressions, in order to get the full appearance and expression completely right. In 2016, he was nominated for Claus Deleuran Prisen for Best Comic Colorist and in 2017, he was granted the three-year working grant from the Danish Arts Foundation.

The works of Adam O. generally fall into the more traditional categories of political satire and children’s books. In Adam O.’s versions these genres are characterized by a remarkable skill for storytelling and interesting point of views. His artistic style and his career are marked by his background as a leftist activist. He did illustrations for the Danish independent leftist online media Modkraft from 2013 to 2015, and since 2015 for the street paper, sold by homeless people in Denmark, Hus Forbi. He creates satirical interpretations of Danish politicians, and typically focuses on the contradiction between official political speech and the reality behind the speech itself.

In 2011, he published his debut book Ruiner (Eng.: “Ruins”), which depicts a political dystopian surveillance society getting out of hand. The book was nominated for Pingprisen in 2012 for Best Danish Debut. His comic series Kakofonia from 2015, set in a dystopian version of Copenhagen, is a wordless comic about the demons hiding inside us all.

Not all is gloom and dystopia in the comics of Adam O., though. Over the last two years, he has published two comics for children, Tonni 2 Ton and Tonni 2 Ton & Jagten på Hugtanja (Eng.: “Tonni 2 Ton & the Hunt for Tania Fang”). The stories are a celebration of the uncompromised fantasy of children, and as such they may serve as inspiration for any adults who find themselves in need of a bit of make believe in their lives.

Johan F. Krarup’s works also belongs to the satirical tradition. Krarup has a masters in philosophy from University of Copenhagen and has taught comics at Kunsthøjskolen i Holbæk (Holbæk Folk High School of Art). He has several publications behind him and made comic strips for the very popular, Danish web portal heltnormalt.dk (Eng.: “completelyordinary.dk”), now wumo.com.

Through his satirical lens, Krarup focuses on the ordinary person and her everyday problems. Corruption is a relatively rare phenomenon in Denmark, however, in Krarup’s latest publication Styrelsen (Eng.: “The Immigration Service”), corruption in the Danish administration is exactly what he deals with. The graphic novel is about a quite ordinary man who in his attempts not to be too much of a pedant starts down a slippery slope. Krarup won two Carl Deleuran Prisen awards for Styrelsen and he was nominated for Pingprisen in 2017 for Styrelsen as well as for his comic strip on heltnormalt.dk with the title Episk fejl (Eng.: “Epic fail”) and several other titles.

Besides being more generally and critically accepted as an art form, and the comics artists themselves experimenting with the format, the genre of comics has also broadened its possibilities for expression is through different digital formats, especially blogs. Several bloggers use drawings to tell anecdotes from their daily lives about troubles, joys and wonders. The drawings of the bloggers tend to be comparable with matchstick men, but with few means, they manage to tell short fascinating stories or jokes. A few have received more attention than others.

Stine Spedsbjerg is the woman behind strictlystine.com. With the combination of cute drawings and gross and self-deprecating humour, Stine Spedsbjerg gives serious issues as identity crisis, depression and heartbreaks a relatable expression. Stine has been nominated for Pingprisen several times for strictlystine.com and her previous blog stinestregen (Eng.: “thestineline”) as well as for a collaboration with Mikkel Maltesen and other web artists. Besides the numerous nominations, Stine has received grants, the Comics.dk award in 2010 for best Danish web comics and the Pentel prize, which is awarded by the Danish newspaper cartoonists.

Line Lisberg Refstrup has also been nominated for Pingprisen several times for her blog linelisberg.dk. Line’s drawings are rarely accompanied by text, which makes them poetic in their expression. Her artistic style is characterized by great versatility, curiosity, and experimentation.

Comic artist and author, Maren Uthaug, uses a simple matchstick-like technique and a witty and honest voice to tell about moments of her everyday life. She does so on her blog marensblog.dk. Uthaug has been a regular cartoonist in the newspaper Politiken since 2013 and she has published two books of comics besides her fiction writings. Both her authorship and the blog has received much attention, of which the latter gained her several nominations for Pingprisen.

These are just some of the notable names of the sprawling and continually expanding scene of Danish comics. We look forward to follow the developments in years to come!